I lost my Bridal Lehenga, A day Before my Wedding! Find out what happened next… 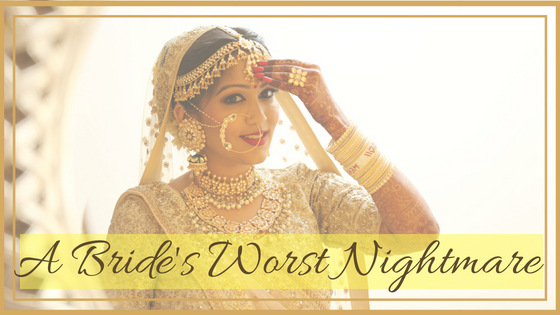 SH*T HAPPENS! But losing your bridal lehenga along with your sangeet gown ain’t sh*t but epic tragedy… And that happened to me… I actually lived a Bride’s Worst Nightmare.

My wedding was in Indore and I had to fly from Guwahati. And I was flying there for my Mehandi function along with my sister, Jiju, and BFF (other guests were flying after few hours) There is no direct flight so I took a flight from Guwahati to Kolkata and another flight from Kolkata to Indore via Raipur.

And I decide to carry my lehenga and sangeet gown with me. I thought as there were more than 70 guests in the next flight, they might misplace it (although I wouldn’t have to pay for extra luggage if I gave to them) but I couldn’t trust anyone with it, and I paid for extra luggage twice. I wrapped the lehenga, sangeet gown and my reception blouse in a big plastic and put it in a carton as they didn’t fit in any suitcase.

So when we landed in Indore, I went to the washroom for touch-up and after two minutes my Jiju yelled: “Anu your carton is not there.” I obviously thought he was kidding. I went out to find that he was damn serious! After asking here and there they said the cartons come in different conveyor belt… and we checked it to only find disappointment, it wasn’t there.

So we went to the ground staff for help, they said they’re finding out. I had no idea what to do, there were people waiting to welcome me outside. My Brother was already at the airport and asked me to stay calm and leave for the venue.

I reached the venue for my Mehandi function, and even after an hour, there was no update of the missing luggage. The staff said that they checked in Raipur airport and it wasn’t there so we had to wait till the flight reach the next destination to find out if its still in the flight.

I had no other option but to wait. There were so many things already going- I had to meet and greet all the guests, get ready for my Mehandi and do dance practice for next day when all I wanted to do was CRY!

My friend and jiju went back to the airport to find out what exactly was going on and the Indigo staff informed that the flight reached the destination and the luggage is not there.

Now, I did cry for 2 minutes but that was not going to help… My main 3 Functions attire were missing. All my dreams were shattered and I didn’t know who to blame… My luck or the Indigo staff or the one who took my luggage.

So all of us started to think for a backup plan. Going and buying new attire was not an option as I had no time, there were functions back to back. And to be honest, shopping for that three attire was 3 months job and now it was gone!

My Sister offered her Gown, which I could wear for the sangeet. For Reception, only the blouse was missing so we called the boutique in Kolkata if they can deliver it in a day to which they agreed and guests coming in next day could bring it with them. And for Bridal Lehenga, we were clueless, cause even if we paid triple it wasn’t going to be made in a day! So, the only option was to ask new-bride’s for their Lehenga.

Can you just imagine, not that the amount I paid for the lehenga, the amount of time spent to find it but it was my “love at first sight” and now I was thinking to borrow someone else’s lehenga… I was going to make my Lifetime memory in someone else’s clothes… I was supposed to look the prettiest that day and I didn’t know if the lehenga I get will fit me or will go with my jewelry but I had no option! There were few who agreed to lend their Lehenga. There are sweet people around you, you need to find them.

While, all of this was going on my jiju and friend were arguing with the Indigo staff back at the airport while the phone rang, and the passenger who took my luggage informed the Indigo Manager (The passenger somehow knew the Manager personally) that he had an extra carton with him and he agreed to bring it back to the airport. (He had 6 cartons and took even mine thinking it was his).

Call it my Bridal Luck but yes I did got my luggage back. The carton was torn but everything was in there.

There were so many things that could have gone wrong. The passenger could have checked the luggage next day or could not have returned it at all but what happens, happens for good. Those few hours were a nightmare, but I think that was one hiccup in my wedding and after that everything went smoothly.

My tip to Bride-to-be’s

No matter what, if you have a wedding at another destination and you are traveling by flight, take your attire in hand luggage. Distribute it among your family members but take everything in hand luggage so no matter what you don’t lose it.

But Hell Ya! This is something I will remember for my lifetime!

Share on FacebookShare on TwitterShare on Google+Share on Linkedin

3 thoughts on “I lost my Bridal Lehenga, A day Before my Wedding! Find out what happened next…”